Bringing Neuroscience to the Patient

Bringing Neuroscience to the Patient

When anorexia nervosa was first described by Richard Morton in 1689, as what he called “nervous consumption,” and later independently by Gull and Lasègue in 1873, there was little understanding of the causes behind the condition. Then, in the late 1960s and 1970, largely promoted by Hilde Bruch’s writings, including her famous book The Golden Cage, a psychodynamic model was adopted that saw the family as the origin and etiology of the problem, like it had been for schizophrenia and autism before. Only over the past three decades has research made tremendous progress in understanding the neurobiological underpinnings of eating and other psychiatric disorders. This has come on the heels of improved technology to study the living human brain, and the fields of neuroscience and psychology developing models to tie behavior with brain function in healthy individuals and test those models in individuals with eating disorders.

Review articles of the brain-imaging literature on anorexia nervosa have repeatedly implicated reward-processing circuits, aside from pathways involved in cognition or emotion processing; nevertheless, understanding the exact neurobiology of anorexia nervosa has been challenging. My lab has pursued the study of reward circuits in anorexia nervosa and specifically the dopamine-associated prediction error model. The dopamine prediction error is a learning signal important for food approach, and animal models have suggested that neuronal dopamine activation has a central role in food intake and restriction.

The dopamine neurotransmitter system has been intensively studied and is well-characterized. Its neurons’ cell bodies lie in the brain stem in the ventral tegmental area and substantia nigra, and from there distribute to the cortical and subcortical brain. The basal ganglia, especially the ventral striatum, which includes the nucleus accumbens, receives dopaminergic input and has been involved in the drive to approach rewarding stimuli. Those reward stimuli can be unconditioned (such as sweet tastes being preferred by babies at birth) or conditioned (learned later in and throughout life), just like in Pavlov’s famous conditioning paradigm.

A central feature of dopamine neuron response is that it is triggered by unexpectancy—i.e., a discrepancy between what one expects and what, in fact, happens. After receiving an unexpected reward such as food or money, a dopamine surge is elicited in the striatum and midbrain, called a positive prediction error response. When receiving this reward becomes a regular occurrence and can be associated with a specific predictor or conditioned stimulus, the dopamine signal is elicited by the conditioned stimulus that predicts the reward. However, the dopamine system does not respond when the actual reward is received, because the prediction matches the outcome. If the reward is predicted but not received (there is no food or money after expecting it), there is a dip in dopamine activity in the brain, which reflects the negative prediction error (unexpected omission). The beauty of this model lies in its applicability to real life. For instance, a colleague surprises a coworker by leaving a piece of cake on his desk, and when he gets to his desk and sees it, he has a surge in dopamine, because there is a reward that was not expected. If this colleague now puts a piece of cake on that person’s desk every Monday, he will learn that Monday is a day when he will find a piece of cake on his desk. Biologically what happens is that when the person gets up on Monday morning, he may think of the cake that he will later receive, and “Monday” will become a conditioned stimulus and he will have a dopamine surge. However, when he gets to his desk and finds the cake, there will be no dopamine surge, because the reward received and the reward expected were similar and there was no “error” in expectation or prediction. What happens if the friendly colleague is unexpectedly sick one Monday and cannot bring the cake? The person still had the expectation of getting cake, but since there is no cake and, thus, he is experiencing an unexpected “omission” of the reward, he may feel disappointed, and that is associated with a dip in dopamine neuron activity.

This dynamic can be studied in the living human brain with functional brain imaging during application of a Pavlovian conditioning paradigm: Participants learn to associate sweet tastes or monetary stimuli with pictures of colored shapes that become the conditioned stimulus and appear on the screen before money or sweet solution is delivered. Sometimes when the participants expect to get the reward, they will not get it; at other times, the reward is delivered unexpectedly.

Using this study paradigm, adults and adolescents with anorexia nervosa repeatedly showed an elevated response to the unexpected conditions in the insula and striatum, which suggests altered dopamine function. Basic science has found that in the process of food restriction, the dopamine system in the brain gets sensitized to stimulate food seeking. We interpreted this elevated activation as a normal response to food restriction to stimulate responsiveness to rewards in the environment. This brain activation, however, does not drive eating as it would in heathy individuals. In fact, it can often be observed in individuals with anorexia nervosa that despite weight loss, fear of weight gain worsens and there is no limit as to how low the weight will drop. In our most recent study, we proposed a model of how this drive to lose weight may be perpetuated and how the elevated prediction error response fits into this behavior.1 Our findings indicate that elevated brain response correlated positively with harm avoidance—a measure of trait anxiety—but negatively with weight gain during treatment. Harm avoidance was positively correlated with drive for thinness and body dissatisfaction. We propose that when a person who develops anorexia nervosa starts to lose weight, the dopamine system quickly gets sensitized. Weight loss leads to low blood sugar and changes in hormonal and neuropeptide levels, which signal to the hypothalamus that the organism should eat. However, this biological motivation and drive to eat disagrees with the conscious motivation to not eat and lose weight, which leads to high levels of anxiety. To avoid weight gain and driven by extreme anxiety, the person with anorexia eats even less, which further reduces weight, triggers more biological drive to eat, and further increases anxiety, thus setting off a vicious cycle that is difficult to break. We have recently published this model in the journal Physiology & Behavior(https://www.sciencedirect.com/science/article/pii/S0031938418309636),2available for free download.

Understanding what is causing an eating disorder is difficult. Models like the above can help provide patients and their families with a framework to better understand anorexia nervosa and other eating disorders, and also explore targets to develop novel treatments. In my clinical practice, I routinely draw figures of the brain and how brain function can be tied to behavior, such as in Figure 1. That helps reduce the stigma and mystery around anorexia nervosa. Furthermore, identifying biological mechanisms that drive eating disorder behaviors helps develop medical models for eating disorders. It is time that we accept eating disorders as problems that not only can be associated with a variety of psychosocial triggers, but also are rooted in genetic predisposition, altered brain function, and bodily changes, similar to other disorders that involve the central nervous system and the intersection of brain and behavior. 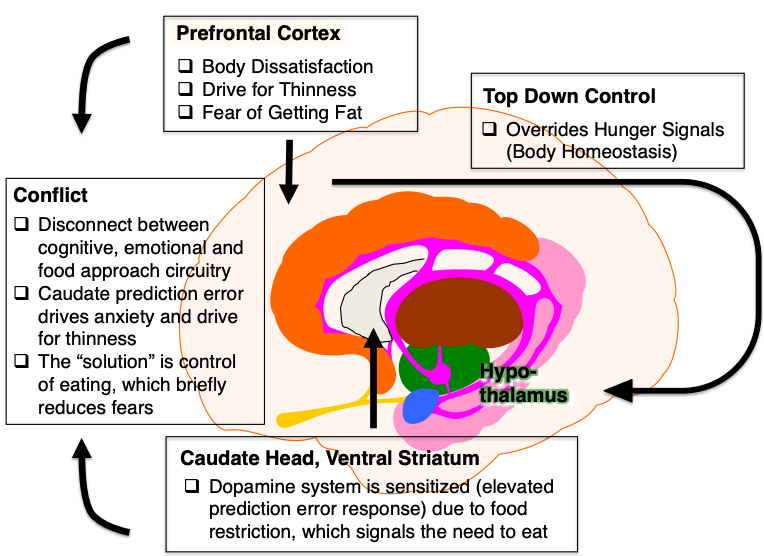 Figure 1. The fear of eating and weight gain conflicts with the body’s signals to stimulate eating, which increases anxiety and drives further food restriction.

Dr. Guido Frank is a professor in the department of psychiatry at the University of California San Diego. He is board certified in adult as well as child and adolescent psychiatry. In addition, he received extensive formal training in biological brain research and psychotherapy. His research interest lies in bridging clinical presentation of eating disorders with brain research to develop more effective treatments. He has been funded through the National Institute of Mental Health since 2008. His combination of extensive clinical and research training gives him a unique perspective on psychiatric disorders and treatment, taking into account all aspects of past and current experience together with potential biological underpinnings. This fosters a neuroscience based approach to treatment.

Posted by Michigan Eating Disorders Alliance at 10:44 AM